The Film Production programme is a two semester intensive full-time course where you study script writing, directing, cinematography, film production, sound and editing, through practical exercises as well as seminars and lectures.

The application for the academic year of 2020/2021 is closed. If you wish to receive updates about the next application period, contact us!

WE HAVE INTERVIEWED SOME OF OUR STUDENTS!

Listen to what our students at the international film production programme have to say about the education, how it has been moving to Sweden, what has been the best things so far and what they will be doing in five years from now. Click on the images to see the films! 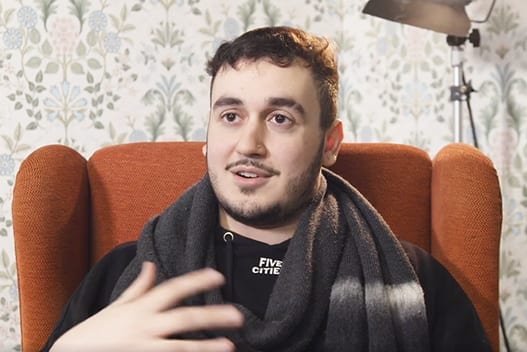 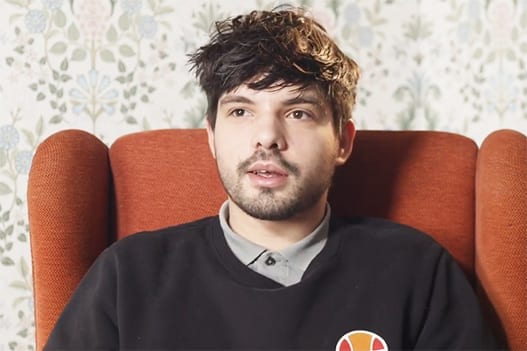 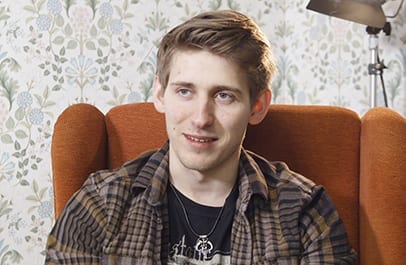 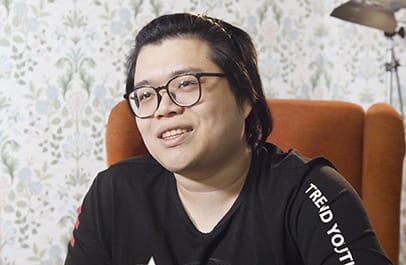 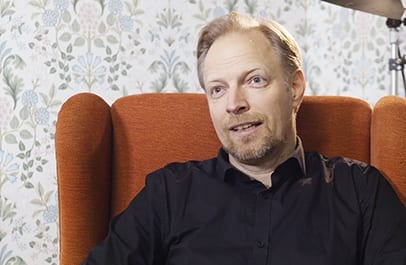 READ MORE ABOUT WHAT OUR STUDENTS SAY

The programme educates in methods of narrative, inspired by universal rules of drama. Our influences are primarily derived from the long tradition of Swedish film storytellers from Mauritz Stiller and Victor Sjöström through Ingmar Bergman, Bo Widerberg and Jan Troell to great international filmmakers of today.

We are also influenced by the great European and American film tradition as well as filmmakers from Japan, China, and in recent years Korea.

Our educational model is based on the simple method of learning by doing and subsequently analyzing what has been done. When that is done we go out and do it again. This process is repeated over and over until the students begin to master the film language. In parallel, each student is encouraged to search for their own creative voice. Theory comes in when we analyze the films we make.

You learn the basics of the complex profession of the film producer. As a director you learn to process a text and analyse the characters. You participate in workshops with actors while practicing directing and you train in how to pitch your ideas. As a cinematographer you will become familiar with different kind of professional camera equipment and learn about lighting in different environments.

You get to make films in studio, on location, and outdoors. We always work creatively in small production teams of 5-7 students.

The studies at the International Film Production programme is 80% practical and 20 % theoretical.

We apply ongoing admission, which means that if we fill up the vacancies in the first or second round of applications, we will not open the second or third round.

The deadline to apply is passed, however we still have a few vacancies left. When we fill up the vacancies, the application will close.

€12,000 /year + €50 application fee
A non refundable application fee of €50 must be received at the time of application in order of the admission application to be processed. Students should pay the first installment of their tuition cost of €800 within 7 days from the date they have been offered a place and have accepted their offer. The second installment of €11,200 has to be paid before the beginning of the school year and no later than 3 August, 2020. For further information please see the full terms and conditions.

The International Film Programme is not covered by CSN – Swedish Board of Student Finance.
Stockholm Film School does not offer scholarships for international students.

Stockholm Film School can not offer accommodation to students unfortunately.

The average price range for rooms in Stockholm is €400 to €1000 a month depending of the distance to the city centre. Read more about your stay in Sweden.

WHAT TO ATTACH TO YOUR APPLICATION

During the spring semester, we usually invite you to our Open House-event at the film school on three occasions. However, due to the circumstances, we want to help prevent the spread of covid-19, and we have therefore been forced to cancel our upcoming Open House, which would have taken place on April 16.

Instead of a physical visit to the school, we offer a virtual visit through a live broadcast from our Instagram account, which will take place on Thursday, April 16 from 4 p.m.-5 p.m. (GMT +2). If you have any questions about the application or education, you can ask them through the chat and we will answer live. If you want to look around the school, we’ll offer a virtual tour! Log on to Instagram and follow us at @stockholms_filmskola.

Film Production is taught in English. It is not covered by CSN – Swedish Board of Student Finance.

Please fill in the contact form if you have any questions about the programme, or would like to receive updates from us.

"I had no contacts in the film industry whatsoever, and knew next to nothing about filmmaking when I started Stockholm Film School. Here I stepped into a world where everyone talked about, and made film. The teachers were dedicated professional filmmakers. I learned all the basics, and since we shot on celluloid a lesson learned was the importance of planning and making well-calculated decisions. Apart from that I met many film mates, and we still hang ot together."

ARIL WRETBLAD, Director of Photography twice awarded with the Guldbagge award for Zozo and Snabba Cash

"I really liked the education, and the life at Stockholm Film School! When I graduated high school I felt that this is a place where everyone was so dedicated and filled with the will to make film. I already knew I wanted to be a cinematographer, and shot a lot since most of the others wanted to direct. When I finished Stockholm Film School I knew a lot about film which I first discovered while working as an assistant. I learned the basics well. If you learn what a film shoot entails, and understand what is demanded of an assistant then you will get a job. I meet many people in the film industry who are former students from Stockholm Film School."

"Stockholm Film School gave me an invaluable foundation to stand on, and the possibility to make mistakes, test stuff and work as much as I wanted and needed. This was a good headstart into the film business, and gave a lot to those who wanted. I have always desired an overview and to stand in the background, so after finishing Stockholm Film School I started my own company with myself as a producer together with a classmate. We at once had great opportunities to grow in the music video industry, within little time we had worked with big artists and today, a few years later I am an investment consultant in film, and executive producer between Stockholm and Los Angeles."

"At Stockholm Film School I discovered what I wanted to do. There I had the opportunity to try out different functions within filmmaking, and to meet professionals. I realized my greatest interest lies in following a story from the beginning to the end. That is why I applied - and was accepted - to the Film Production education at The Stockholm Academy of the Arts."

”I knew I wanted to make film, but not exactly in what capacity, so it was great to learn all the different functions and the whole work process. I got a job as editor after the Film School. Today I am the CEO of a post production company and I have enormous use of knowing film production on all levels. It creates trust with my customers and I can be both supportive and make better decisions. At school I met many cool film mates with whom I am still in contact."

"I had fun at Stockholm Film School. But first and foremost, I had wonderful teachers who were professional, industrially-trained artists, who shared everything they had from the industry's knowledge with us. Directing teacher Moberg and photographer-teacher Holmberg constantly tested our abilities and made me aware of how to work with actors, as well as all the technical and visual needs of learning about a camera. "

READ MORE ABOUT WHAT OUR STUDENTS SAY

INFORMATION REGARDING YOUR STAY IN SWEDEN

COST OF LIVING IN STOCKHOLM (2020)
The cost of living is approximate €836 / month. This excludes rent and private health insurance. (Read more here and here.)

HEALTH INSURANCE
EU/EEA/Swiss citizens -you should register for a European Health Insurance Card (EHIC) in your home country before coming to Sweden. This card gives you the right to medical care at the same cost as Swedes.

Stockholm Film School does not have the possibility to offer accommodation for students.

The average price range for rooms in Stockholm is €400 to €1000 a month depending of the distance to the city centre.

There are several webpages that offer accommodations. Although the majority of rentals posted online are legit, you should always follow these three simple rules for your safety:
1. Never pay before signing the contract.
2. Ask the landlord for their personal id when signing the contract to validate their information (they will do the same with you so don’t be shy).
3. Pay the deposit only to a Swedish bank account.

GET BEHIND THE CAMERA!

Take a peak at what it looks like on set while our students are shooting film.
Click on the images to see a short video.

Shooting the film PARALLELLUM with our international students.

Shooting the film MAILBOX with our international students.

Stockholm Film School (Stockholms Filmskola) is a non-profit association with corporate identity number 802014-4187, which conducts educational activities without yielding profit. The education is financed exclusively via tuition fees.
The film school has statutes, a board and an employed artistic leader/principal. The film school owns certain technical equipment and employs requisite teachers.

The total tuition fee for the international course per school year is €12.000. In order to accept the offer and secure your place at Stockholm Films School it is necessary to pay the fees and charges due as indicated in the Letter of Offer.

A non refundable application fee of €50 must be received at the time of application in order of the admission application to be processed. Students should pay the first instalment of their tuition cost of €800 within 7 days from the date they have been offered a place and have accepted their offer. The second instalment of €11,200 has to be paid before the beginning of the school year and no later than 3 August, 2020. When nonpayment according to invoice occurs, statutory fees will be added.

Payment is made via bank transfer to:

If an applicant who has been accepted to the school and paid the first instalment decides, of any reason, not to start the course, the film school must be notified in writing by e-mail as soon as possible, at the very latest on 10 July or s/he is obliged to pay the remaining tuition fee of €11,200 according with the sent invoices. The first instalment of €800 is non-refundable.